One of my current research projects focuses on a particular social set of artists and musicians that came together in West London during the late nineteenth century. Though its most illustrious members (including Pre-Raphaelite painters and famous concert pianists) were men, the women of the group have their own important stories to tell. I’ve found that the wives and daughters of the men in this gang often had their own careers in art and music, but their stories have been relegated to the footnotes of books about their fathers and brothers.

In this post I will share the story of one of these women – the musician and suffragette Winifred Raven Holiday (1866 – 1949). She was the daughter of eminent artist Henry Holiday, whose work with a formidable model called Priscilla was the subject of my last post.

Winifred’s mother, Catherine (Kate) Raven, was also a noted artist. A gifted embroiderer who worked with Morris & Co., she developed her own techniques and executed William Morris’ designs on a large scale. Morris left the colours to her judgement, explaining to Henry Holiday: ‘I’d back your wife for heavy sums against all Europe at embroidery’.

Kate was also a skilled amateur pianist who shared her husband’s passion for music. The family counted many leading figures from the world of music amongst their closest friends, including the violinist Joseph Joachim, conductor Hans Richter and composer Hubert Parry.

Kate and Henry’s only child, Winifred, therefore grew up in an intensely musical environment. The Holidays hosted large concerts at their home in Hampstead, and dinner parties involved music too. At one garden party in 1881, guests including William and Fanny Holman Hunt, Lady Burne-Jones and Sir Lawrence Alma-Tadema enjoyed Richter’s performance on the piano of extracts from Wagner’s Ring cycle. This had not yet been performed in England. On this same occasion a young Winifred – already a talented violinist in her early teens – performed Bach’s piano and violin sonata in B with Hans Richter.

There are two notable paintings of a young Winifred with her violin. The first is by John Collingham Moore. It appears the identity of his sitter has been lost over time – the painting was sold at auction as The Young Violinist some years ago, but a reproduction in Henry Holiday’s Reminiscences confirms that the sitter is Winifred.

The second is a particularly beautiful watercolour portrait of Winifred (on the left) and her friend, Alexandra Kitchin by Henry Holiday himself. My favourite detail is the tiny profile portrait of Mozart just over Winifred’s shoulder. This paitning sold at auction in 2004. ‘Xie’, as Alexandra was known by her friends, was the daughter of Reverend George William Kitchin, a friend of both Ruskin and Lewis Carroll.

Carroll, who owned at least one of Henry Holiday’s paintings, famously took several photographs of a young Xie.

When the Royal College of Music opened in 1882, Henry felt it was a little late for Winifred’s musical education as her skills were already advanced. However, he was keen for her to gain experience in performance and sit appropriate examinations. He said: ‘Orchestral-playing, ensemble practice, and harmony and counterpoint, are all essential to a musical education, and these were all to be had, and of excellent quality, at the College.’

His talented daughter was awarded a scholarship and soon excelled in her studies. Her proud father reported that ‘In advanced harmony and counterpoint Winifred came out first in the last year of her scholarship, though it was only her second study.’

One incident which occurred when she was a student confirms Winifred’s skill. The violinist Henry Holmes was taken ill just before he was scheduled to lead a concert in Newcastle. He asked Winifred to stand in for him. She led performances of quartets by Mozart and Haydn which she was familiar with, as well as a quintet by Schumann which she had never played. Henry reported ‘There was only time [for Winifred] to travel down, get one rehearsal there, and then perform all the works in public. According to accounts of the other members of the quartet, and of the local press, it was a brilliant success.’

When Winifred had completed her time at the RCM, she spent some time in Berlin where she played in a quartet with celebrated violinist Joseph Joachim. On her return to London she formed a quartet of her own – her pianists included both Fanny Davies and Leonard Borwick, both notable performers in their own right. With the help of clarinettist Mr. Draper, her father explained, ‘they played Brahms’ quintet for clarionet and strings, a work of no small difficulty, not often heard.’

In the autumn of 1893, at the urging of his wife, Henry Holiday took Winifred on something of a pilgrimage across Europe. Their final destination was in Bayreuth. Joining them on this journey was Winifred’s friend, a fellow Wagner devotee called Miss Florence Scott. On their grand tour they enjoyed much music, one highlight being a meeting in Venice with the man in whose arms Wagner had died. The grand finale of the tour was a performance of Parsifal and Lohengrin, which (according to Henry) ‘seemed to soar into the regions never before attained by any composer’.

In the years that followed, Winifred established herself as a performer of note. She led a ‘ladies orchestra’ which gave performances in cities around Britain, also leading a second orchestra primarily made up of female players. They performed to predominantly working-class audiences. Her father said: ‘The audiences at these concerts are largely working-class, and it is delightful, though to me not surprising, to see their enthusiastic appreciation for the greatest works of the greatest masters. There are few concerts I enjoy so much.’

As this begins to suggest, Winifred was (like her parents) very politically aware – a supporter not only of workers’ rights, but an active suffragette. In my next blog post, I will discuss Winifred’s activities as a suffragette, and reveal that she leveraged her father’s contacts in the art world to win support for the cause. Watch this space…

My research on the connections between musicians and artists in late nineteenth-century London has led me towards a number of bohemian families. Often, I’m finding, the daughters of well-known artists became musicians – or vice versa. These women played a vital role in connecting the communities they were part of, and many were also extremely politically active. Uncovering their stories has been one of the most exciting revelations of this project so far, and I’m looking forward introducing them to you as my research develops. 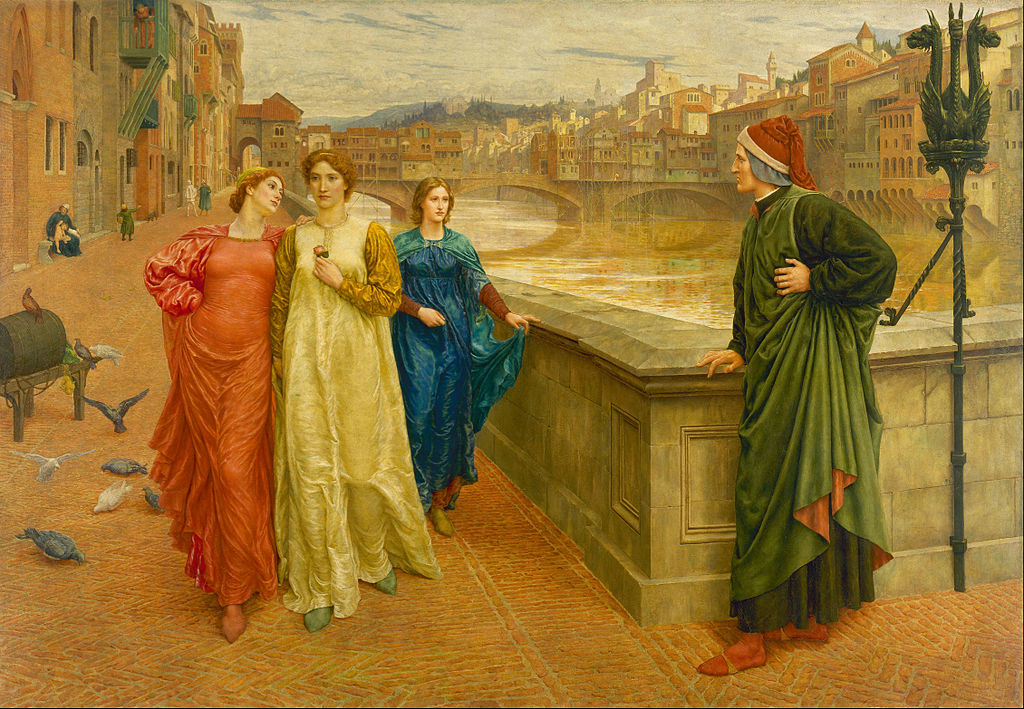 Today, though, I want to discuss a woman who was on the fringes of this bohemian community. She wasn’t a member of an affluent artistic family but was nevertheless able to capitalise on her connections in the art world in order to forge a career in music. I came across her story in the autobiography of artist Henry Holiday, whose family straddled the worlds of art and music in just the way I have described. A member of the Pre-Raphaelite school, Holiday is best remembered for his Dante and Beatrice, now at the Walker Art Gallery in Liverpool. His Reminiscencesare a brilliant read, offering a great deal of insight into the worlds of art and music in late-Victorian and Edwardian London. Here’s the section that piqued my interest: 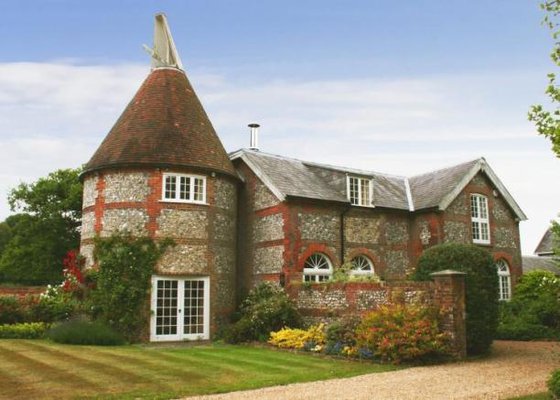 Henry Holiday’s house in Kent, as it looks today

Our house, “Portlands” by name, near Knockholt, was seven miles from St. Mary Cray, our nearest station, so that it was impossible to have models for a few hours, and we had either to have them in the house or get a room out. Burne-Jones told me of a very good one, Miss Priscilla W., who stayed with us for two or three weeks at a time while I was painting the Muses. I remember that she told me during the sittings the greater part of the story of “Our Mutual Friend,” which was then new, and I had not read it. She had a wonderful memory and repeated whole conversations with a keen sense of the humour. During her second visit I heard her one morning singing to herself during a rest, and said to her, “That’s a Sonata of Schubert’s you’re humming.” “Yes,” she answered, “I know it is.” “But how do you come to know it?” “Mrs. Holiday used to play it when I was last here, and I love music.”

I was struck by her musical memory, and she, on hearing more of my wife’s pieces, developed so keen an interest in them that she saved up money enough to buy a piano, and Mrs. Holiday gave her some lessons. Later we introduced her to Miss Bondy, an admirable pianist, who kindly gave her lessons at a moderate charge, and in an incredibly short space of time she became an accomplished musician and had given up sitting for teaching the piano.

There are many reasons that this short passage jumped out at me. Firstly, I wondered, who was Priscilla W? I’ve had a dig around and can’t find any information about a model with that name – unless I’m missing something obvious. If she was recommended by Burne-Jones, does that mean she modelled for him too? We know a lot about some of the famous models who worked in Pre-Raphaelite circles – might Priscilla be worthy of further research?

The frieze, as reproduced in Holiday’s Reminiscences 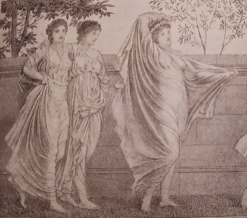 Details from the frieze, as reproduced in Holiday’s Reminiscences

All Holiday tells us is that Priscilla was the model he used for his frieze Apollo and the Muses, which he completed for the Clifton Theatre. I can’t find any information about this venue online, and it seems unlikely that the frieze survives. However, Holiday does reproduce a drawing of it in his memoirs. 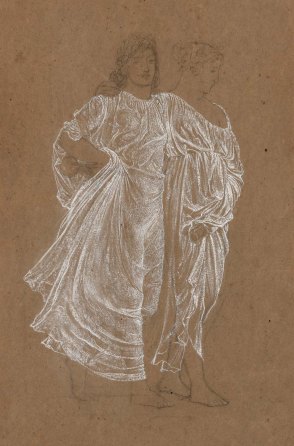 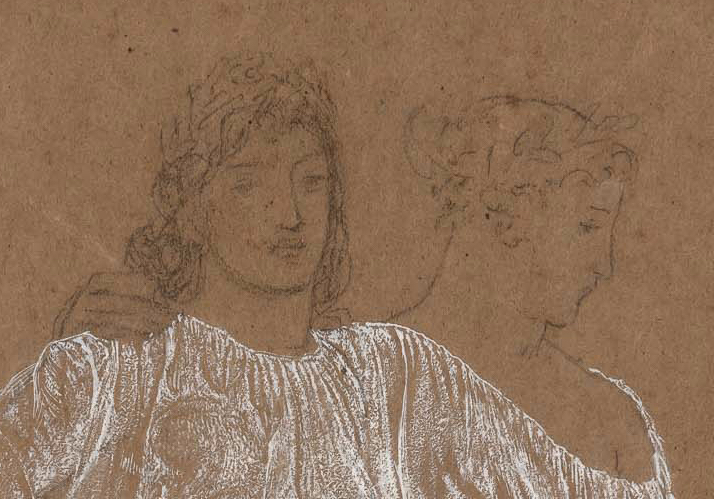 While searching online, I also came across two preparatory drawings for the muses that were sold at auction recently– see here and here. These three sources give us some indication what Priscilla looked like. It seems that she had red wavy hair and a strong jaw – characteristic features of Pre-Raphaelite women.

The main reason Holiday’s description grabbed my attention, though, is that Priscilla sounds like a force! With an appetite for literature and music, and the ability to memorise Dickens and Schubert, she was clearly culturally engaged and extremely smart.

Miss Bondy in The Musical World

Most striking, though, is the way in which she was able to leverage the contacts her modelling career gave her access to. She set herself up as a piano teacher, which was both a more stable and more respectable form of work. It’s also notable that it was other women who facilitated this career move – the artist’s wife, Catherine Holiday (herself a noted textile artist who worked for William Morris) took the initiative in assisting Priscilla. Miss Bondy then offered lessons at a reduced rate. This is a great example of women helping women.

Without her full surname it’s difficult to research Priscilla’s career as a teacher, but I have found some adverts for piano recitals given by her own teacher, Miss Bondy. It’s possible that Priscilla also performed at some of these. I’ll continue to dig around in the archives and see what I find. In the meantime, if any readers have thoughts or suggestions about who this mysterious musical model was (and what else she might have modelled for!) I’d love to hear them…