It’s been a long time since I updated my blog, so I thought it was about time I got back on it – especially as I’ve (finally!) started some exciting new projects. The first of these is entitled Musical Portraits in Bohemian London: 1870 – 1930. I was lucky enough to be awarded an Understanding British Portraits Fellowship to support this research, which you can read more about here.

In a nutshell, my aim is to explore the relationships that existed between (visual) artists and musicians in this period, using four portraits at the Royal College of Music (RCM) as starting point. This post is about one of these portraits – a stunning Edward Burne-Jones painting of Ignacy Jan Paderewski. 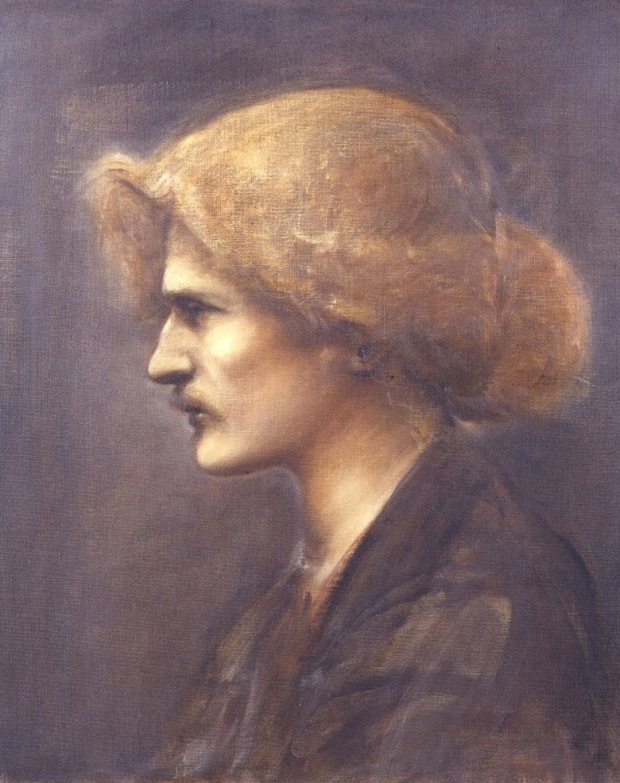 An international piano virtuoso turned statesman, the Polish polymath Paderewski deserves to be far better known that he is. Indeed, I had never heard of him before I started working at the RCM. Allow me to introduce him…

Born in Poland in 1860, Paderewski studied music at the Warsaw Conservatory, later becoming a piano teacher there. In 1880 he married one of his pupils, Antonina Korsak, who sadly died in childbirth the following year. Encouraged and financed by a Polish actor named Helena Modjeska, he studied in Vienna for several years before making his first public appearances as a concert pianist. Modjeska, as a famous actor, was well aware of how a person had to market themselves – she encouraged Paderewski to wear his hair wild, and dress in dark clothing so that he would cut a romantic and artistic figure. Her advice worked – he soon became a sensation and was in demand across Europe.

The pianist inspired an almost fevered devotion in his fans – particularly his female fans. They were dubbed the ‘Paderwski girls’, or sometimes the ‘Paderewski cult’. There were often small-scale riots at his concerts, as women rushed up to him with scissors hoping for a lock of his famous hair. On one occasion the pianist fainted as he was so overwhelmed by the mob of women that surrounded him! Many were quick to cash in on the popularity of the new virtuoso – he became a celebrity in a very modern sense. He was featured in adverts for a wide range of goods, and his portrait appeared on collectible prints, posters and souvenirs. [1]

But Paderewski was far more than a pianist – he also became a noted statesman. Throughout his career, he had been a staunch patriot and often used his platform to endorse the cause of Polish independence. During World War One, he was appointed as a representative of the Polish National Committee in the United States, and was instrumental in gaining President Woodrow Wilson’s support for an independent Poland. In 1919 Paderewski became Prime Minister of Poland and represented his country at the Paris Peace Conference in the same year – there he signed the treaty of Versailles, which restored some of his country’s former territories.

Although his time as Prime Minister was short, Paderewski achieved an impressive amount during his time as leader. He called a democratic election, passed a treaty to protect ethnic minorities and established a public education system. After the election Paderewski resigned, but he continued to represent Poland at the League of Nations. Here he was the only delegate who did not require a translator, as he was fluent in seven languages.

In 1922 the composer retired from politics and re-dedicated himself to music. He performed across the United States, travelling around in a private railway car. During World War Two Paderewski put his political hat on for one last time, travelling to Europe to speak out against the Nazis. In 1941, the 50th anniversary of the pianist’s first US tour was celebrated with a festival called ‘Paderewski Week’ – over 6,000 concerts were put on across the country in his honour. The composer died later that same year.

In later posts, I’ll discuss the important relationship Paderewski had with artists – most particularly Edward Burne-Jones. I’ll also be sharing some fascinating archival sources that provide new insight into the musical world of Burne-Jones and his circle. Watch this space…

[1] For more on Paderewski’s image, I highly recommend this excellent article which is freely available on JSTOR: Maja Trochimczyk, ‘An Archangel at the Piano: Paderewski’s Image and His Female Audience’, Polish American Studies, Vol. 67. No. 1 (Spring 2010) pp. 5-4